Forests as Sponges for Greenhouse Gases 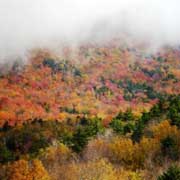 Combustion of fossil fuels releases large amounts of carbon dioxide. Roughly half of this carbon dioxide stays in the atmosphere, where it serves as a major greenhouse gas and warms the planet. The remaining carbon dioxide is absorbed by forests and oceans. The Goodale lab studies factors, such as air pollution, that can affect rates of carbon dioxide accumulation by temperate forests. Their recent work has shown that nitrogen compounds from air pollution increase rates of carbon accumulation by many northeastern U.S. tree species and slow rates of decomposition in soil organic matter. Together, these processes serve to accelerate forest removal of carbon dioxide from the atmosphere. However, decomposition responses vary, and nitrogen pollution causes declines for some tree species and for old-aged forests. The Goodale lab studies these processes through field and lab experiments and through analysis of regional monitoring data. They have also begun to collaborate with global Earth System modelers to project the consequences of these processes for Earth's future climate. 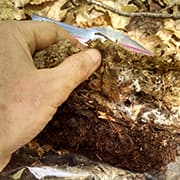 Use of fertilizer and combustion of fossil fuels both release nitrogen compounds into the atmosphere, and this nitrogen later falls onto forests and other ecosystems downwind. Nitrogen pollution has a cascade of consequences as it moves through various ecosystems: in forests, it can change growth rates, cause species losses, drive acidification of soils and streamwater, and contribute excess nutrients to downstream waters. The Goodale lab uses several approaches to study the fate and environmental consequences of this nitrogen pollution. In one study, they applied small amounts of a special form of nitrate-nitrogen (enriched in 15N, a stable isotope) onto a mixed hardwood forest, and then measured how much of this distinctive nitrogen accumulated in soils or trees, or was lost from the forest in the form of nitrogen gases or streamwater. They found that soil organic matter retained most of the added nitrogen, whereas trees accumulated very little. Surprisingly, they found that the largest losses of nitrogen occurred during mid-summer, when plant and microbial demand for nitrogen was expected to be greatest. Additional studies of seasonal dynamics will help identify the most important processes for retaining nitrogen in forests, which provide a basic ecosystem service in preventing nitrogen pollution of downstream waters. 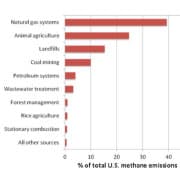 As conventional reserves of natural gas become depleted, society increasingly is turning to shale gas as an alternative. The shale gas, natural gas tightly tied up in shale formations, was not commercially available before the recent development of high-volume hydraulic fracturing and horizontal drilling to free up the gas. Many have promoted shale gas as a bridge from fossil fuel to renewable energy because burning natural gas is thought to emit fewer greenhouse gases than oil or coal. Bob Howarth and his colleagues, Tony Ingraffea and Renee Santoro, published the first comprehensive analysis of the greenhouse gas footprint of shale gas in April of 2011. Their analysis challenged the conventional wisdom. They found that when methane venting and leakage are included in the analysis, shale gas actually has a greater greenhouse gas footprint than other fossil fuels. Natural gas is composed largely of methane, and methane is a far more powerful greenhouse gas than carbon dioxide, so even small amounts of gas venting and leaking lead to a very large greenhouse gas footprint.

In a follow-up paper published in February 2012, Howarth and colleagues use the most recent data from the U.S. Environmental Protection Agency as well as the latest science on the global warming potential to put shale gas into context. Methane already contributes 44% of the entire U.S. greenhouse gas inventory, including carbon dioxide and all other gases from all human activities, when viewed on the 20-year time frame after emissions. The natural gas industry is by far the largest source of this methane. Howarth and colleagues predict that switching from conventional gas to shale gas increases methane emissions by 40% to 60%. Because of the urgent need to address critical tipping points in the Earth's climate system over coming decades, Howarth emphasizes the need to consider methane effects at the shorter decadal time scale. From this context, far from being an environmentally benign bridge fuel, shale gas poses significant risk of intensifying global warming.