On topics ranging from oceanic disease to restraining invasive species from distant seas, Cornell faculty joined more than 10,000 scientists to discuss “Envisioning Tomorrow’s Earth” at the American Association for the Advancement of Science (AAAS) annual meeting, Feb. 14-16 at the Washington State Convention Center in Seattle. 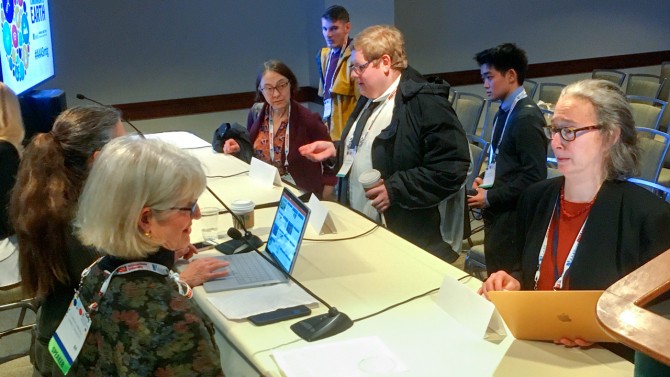 Drew Harvell, professor in the Department of Ecology and Evolutionary Biology, spoke at a Feb. 14 AAAS press conference with Carolyn Friedman of the University of Washington and Kristina Miller of Fisheries and Oceans, Canada. They presented their work on the pathogens and disease of problematic waters in the deep sea and close to shore.

“Infectious outbreaks among ocean organisms are fast and impressive in scale, and hard to detect and track,” Harvell said. “Widespread outbreaks in the ocean are fueled by human activity, like land-based pollution, but especially by a warming ocean.”

“Ocean warming touches all parts of the globe and is responsible for increasing levels and intensity of infectious disease outbreaks in organisms from both tropical and temperate habitats,” she said. “The loss of keystone species – like sea stars – is disrupting the ecosystem.”

New research tools such as artificial intelligence can help rapidly spot disease – even in individual blades of seagrass – while drones and molecular diagnostics can help researchers resolve oceanic nightmares.

Said Harvell: “Artificial intelligence applications, developed with Carla Gomes (professor of computer science and director of the Institute for Computational Sustainability) are allowing us to vastly expand the scale for which we study.”

David Lodge, professor of ecology and evolutionary biology, and the Francis J. DiSalvo Director of the Cornell Atkinson Center for Sustainability, helped organize and lead a 90-minute symposium on forecasting biological invasions of coastal oceans by species that hitchhike on ships as they move goods around the world. 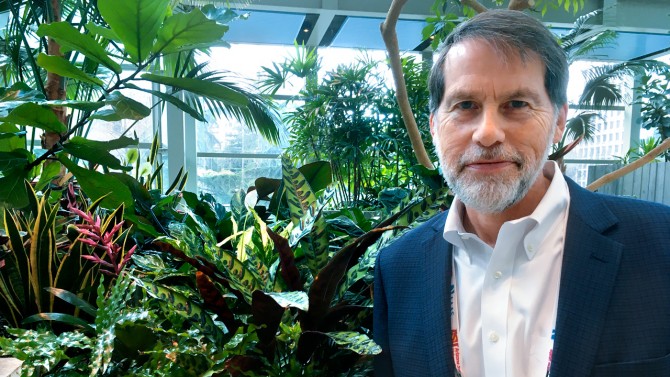 David Lodge arrives at the Washington State Convention Center Feb. 14 to discuss the prediction and prevention of invasive species traveling the world on ships.

“We’re predicting where invasions are most likely to occur next by modeling ship movements and using eDNA methods to motivate improved management,” Lodge said.

The scientists are examining a network of ships, he said, to predict the unintentional distribution of harmful species to help policymakers decide which ships and which ports would benefit from more management.

‘Dawn of something new’

Lynden Archer arrived in Seattle to share ideas on clean energy and a holistic philosophy of becoming green. He spoke on how renewable energy will play a key role in development of a sustainable global energy infrastructure.

Archer, the James A. Friend Family Distinguished Professor in Engineering and the David Croll Director of the Energy Systems Institute, said the transition to clean energy is inherently a systems problem that often has impact in unexpected places. 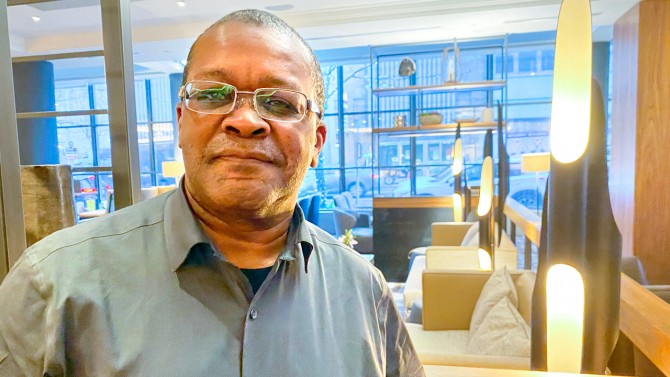 In downtown Seattle, Lynden Archer prepares Feb. 13 to speak on energy storage at the AAAS meeting.

He explained that renewable energy generation from solar and wind installations, have – in the last decade – reached price points that make them competitive without government subsidies.

Market penetration has been slow because the supply is variable and intermittent, said Archer, discussing a new rechargeable battery technology based on Earth-abundant metals that can meet the cost, safety and scale requirements for managing such intermittency.

“We are on the dawn of something completely new – where technology is becoming integral in every aspect of human life,” Archer said. “Developing clean and portable sources of power is a next crucial step.”

In Bangladesh, eggplant is heavily prone to attack by the eggplant fruit and shoot borer throughout the growing season. Small-holder farmers who grow eggplant spray their crops with pesticides as many as 80 to 100 times each season, said Anthony Shelton, professor of entomology at Cornell AgriTech in Geneva, New York.

Shelton explained to the AAAS colleagues his role in getting eggplant to express a naturally occurring Bacillus thuringiensis (Bt) protein to fend off the formidable insect.

“People need a diverse diet of fruits and vegetables, that contain vitamins and minerals to fight the hidden hunger of malnutrition,” he said. The green revolution was important for providing caloric input globally, but for a healthy diet – you need micronutrients from fruits and vegetables.”

After growing the new eggplant, Bangladesh small farms realized a six-fold increase in net returns and studies demonstrated no harmful effects on the crop or on non-target organisms. Shelton said the reduced use of insecticide for the eggplants has ranged from 61 to 98 percent, and from an initial 20 farmers to grow this in 2014, now more than 31,000 grow this insect-resistant eggplant.

Bart Selman, professor of computer science, spoke at the conference on the need for a national artificial intelligence (AI) research infrastructure road map.

AI techniques have been developed, improved and are starting to work at the human-competence level, Selman said.

“Now we have rapid adaptation into competence,” he said, “such as personal assistants, self-driving cars and all kinds of areas of society – and this is largely driven now by large companies.

“However, there are national needs to address such as using AI for medicine, for elderly care and for scientific discovery,” said Selman, who has been elected incoming president for the Association for the Advancement of Arti­ficial Intelligence.

“Our federal government should grab this opportunity and make those investments … to make national AI resources accessible by everybody, in order to make these things work for the whole nation.”

“Our federal government should grab this opportunity,” Selman said, “and make those investments … to make national AI resources accessible by everybody, in order to make these things work for the whole nation.”

In a standing-room-only forum, Joe Halpern, professor of computer science, organized and led a discussion on ethical issues in artificial intelligence, the applications of which range from hiring employees to the future of war.

“Now we have far more powerful computers than we’ve ever had. We also have enormous datasets, and that’s been a game-changer,” Halpern said. “Now we have robots in nursing homes and ubiquitous facial-recognition software in places like China and London. We have algorithms for who gets loans, who gets hired, who gets paroled – and people have started to worry. There are ethical issues that arise due to the algorithms. This is a multifaceted problem.”

Halpern talked about how data – perhaps skewed data – will feed an algorithm used in human resources.

James Larison ’70, PhD ’01, Reflects on his Career as a Nature Filmmaker

The origins of newness, revealed in a butterfly wing