For the colorful, graceful sea fans swaying among the coral reefs in the waters around Puerto Rico, the metal copper is an emerging threat in an era of warming oceans. 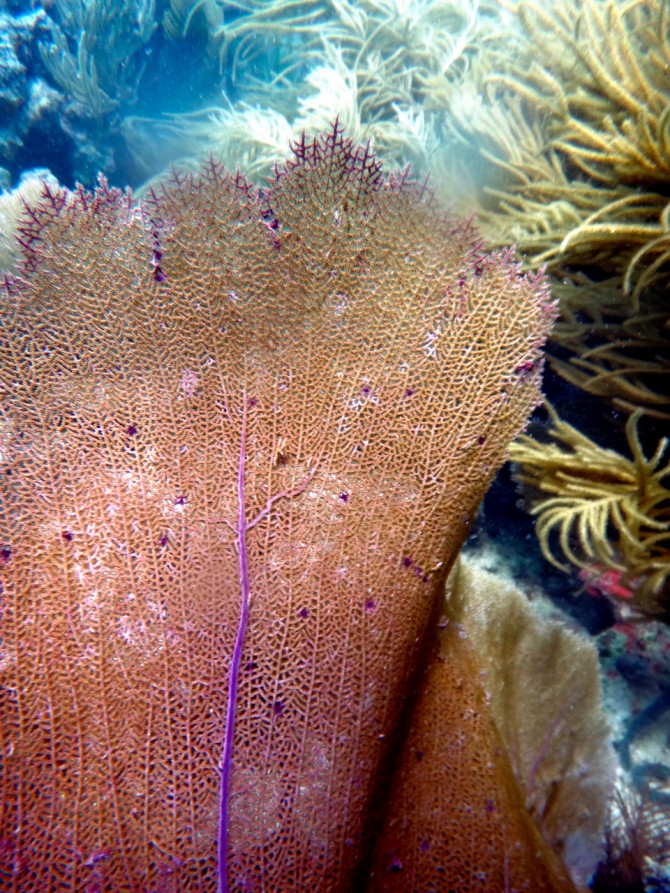 “We know warming oceans pose an existential threat to coral reefs around the world,” said Allison Tracy, Ph.D. ’19, who conducted this work with Drew Harvell, professor of marine biology. “Action to alleviate the impact of warming oceans is a priority, but understanding the role of pollutants in coral disease and mortality gives us more options for solutions.”

While plastics and microplastics are a well-known threat to the world’s oceans, the effect of metal contamination is poorly understood, according to the researchers. Increased copper pollution can be a result of agricultural runoff and marine paint leaching from boat hulls.

Over a one-year period, the researchers tracked 175 individual sea fan colonies with varying levels of copper concentrations found in the sediment at 15 coral reef sites around Puerto Rico. They found that reefs with higher copper concentrations in the sediment suffered a reduction in recovery from multifocal purple spots disease – a disease that can plague the sea fans.

In the laboratory, Tracy found that sea fans initially launched an immune response to a damaging infection at low levels of copper and temperature stress. But when copper concentrations were boosted, sea fans’ immune response failed, which suggests that copper stressed the sea fans and eliminated their immune potential, she said.

“The patterns we saw in immune markers are important because they show a mechanism through which copper and warming oceans can impair the corals’ health,” Tracy said.

This research supplied novel data on the role of environmental stressors in coral disease and may provide a toolkit for combatting coral disease on a local scale. “We can’t manage the climate damage to coral reefs,” Harvell said, “until we better understand how pollution and disease magnify the impacts of heat stress. Although healthy corals in thriving ecosystems also experience low levels of disease, the concern is that changing ocean conditions and increased pollution have led to increased disease outbreaks,” she said. “As a result, corals may be losing the battle with their pathogens as ocean stressors tip the balance in favor of disease.”

Ernesto Weil, professor of marine science at the University of Puerto Rico, Mayagüez, is a co-author on the study and collaborated with Tracy and Harvell on field surveys and experiments that were conducted at UPRM’s Isla Magueyes Laboratories.

The National Science Foundation, the Cornell Atkinson Center for Sustainability, The American Academy of Underwater Sciences, The Andrew W. Mellon Foundation, and Cornell’s Department of Ecology and Evolutionary Biology funded this work.