Active, immersive learning is one of the best ways to recruit and retain students in STEM fields, and Cornell’s Shoals Marine Laboratory (SML) has been doing it for 50 years.

Part of the College of Agriculture and Life Sciences (CALS), SML was founded in 1966 on the Isles of Shoals, off the coast of Maine, by a group of faculty from Cornell, the University of New Hampshire and others. It was the first marine laboratory in the country focused on undergraduate students, and it is still the largest. Shoals, which also hosts summer classes for high school students, draws students and faculty from around the world.

A significant body of research has shown that when STEM courses are active, experiential and immersive, more students choose those fields and stick with them.

From its beginning, learning at Shoals has been experiential and immersive. Students live in dorms on the marine lab’s island campus during each course, typically two weeks in length and worth full course credits. A normal day stretches from 8 a.m. to 9 p.m. but only includes a few hours of lecture, while the rest of the day is spent in the field, said Jennifer Seavey, SML executive director.

“Field work could be aboard a commercial ground fishing boat where students actually run trawls and take data. Or out in the rocky intertidal zone, learning how to quantify species presence and abundance. The majority of our classes are out in the field for most of the day,” Seavey said. “Each student spends their day engaged in real science, and everyone on the island is doing something compelling in a related field. You are wonderfully immersed in your topic here.”

For many, the experience is formative. 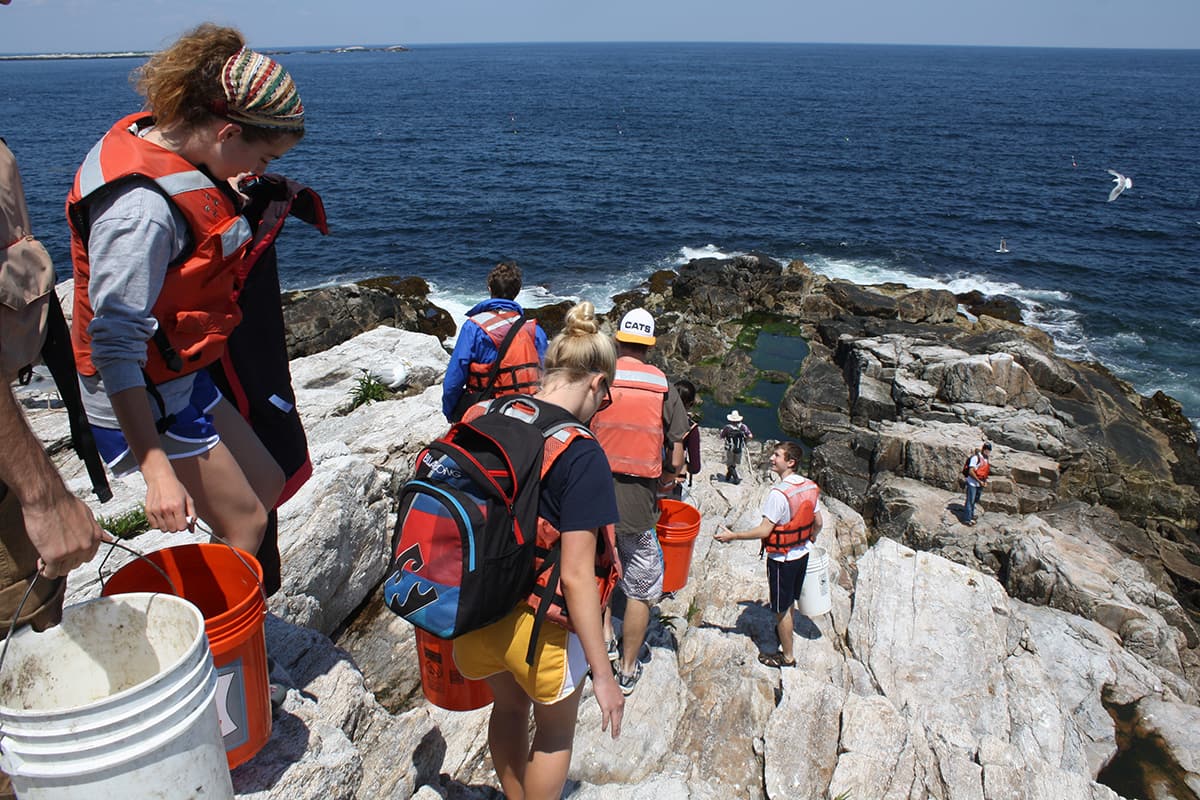 Students spend a two-week semester engaged in hands-on learning at the lab.

Vanessa Constant ’14 took her first class at SML as a high school student. As a freshman at Cornell she returned to Appledore Island in summer 2011 for the Marine Invertebrate Biology course taught by Drew Harvell, professor of Ecology and Evolutionary Biology, and to conduct an independent project with the guidance of senior research associate Robin Hadlock Seeley.

“The transformative experiences I had at Shoals launched my scientific career and helped lay the groundwork for my future academic and research pursuits as a coastal ecologist,” said Constant, a doctoral student at Oregon State University.

“I think fondly of my time on the island and warmly reflect on the profound influence it had on me as a young scientist. SML helped position me to be an engaged student, proactive researcher and dynamic communicator,” she said.

“I have heard from countless professors and scientists that it was a field class or a research internship, like what we offer at SML, that made them want to become a scientist,” she said. “And even if you don’t choose to pursue science as a career, you will have a better understanding of science, and we need that so much in this world where challenges exist because many Americans don’t even trust science. Having that immersive experience with science, first-hand, hands-on, yourself, will help you decide whether or not you trust science.”

Shoals’ students come from Cornell, the University of New Hampshire and elsewhere. They include students majoring in biology, natural resources, environmental science, engineering and other subjects.

“Many students absolutely love the topic, but for some the topic doesn’t really matter,” Seavey said. “It’s an experience that can translate across any scientific discipline where you take data and design your methods, analyze it, represent it to people who weren’t there, and tell the data’s story. All of those steps are universal to science.”

Krisy Gashler is a freelance writer for the College of Agriculture and Life Sciences. This article also appeared in the Cornell Chronicle.