It’s not just about the size of the dog. It’s how high he can pee.

According to new research from Cornell University, smaller dogs angle their legs higher when they urinate, possibly to exaggerate their body size.

Betty Anne McGuire, senior lecturer in the Department of Ecology and Evolutionary Biology in the College of Agriculture and Life Sciences (CALS), studies scent-marking behavior in dogs – how, why and where dogs urinate as they mark territory to communicate with other dogs.

Scent-marking is common among mammals. Animals may mark a territory to show ownership, or “over-mark” a spot where another animal has peed to demonstrate social status. Extensive research with laboratory mice has shown that when a mouse smells another mouse’s urine, it can pick up signals about health status, reproductive status and individual identity. 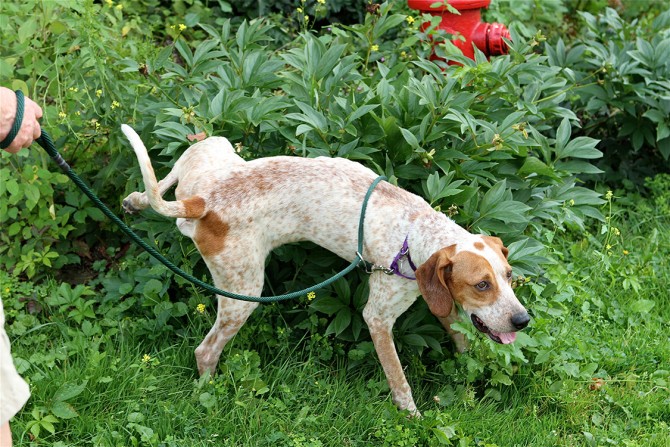 Jacob, a large shelter dog from Cortland, prepares to mark a bush.

In the August issue of the Journal of Zoology, McGuire and three co-authors – Boomer Olsen ’17, Katherine Bemis ’15 (McGuire’s daughter) and Destiny Orantes ’20, Cornell undergraduates when they started the research and followed through to publication – found that small, male domestic dogs angle their legs higher when they pee, possibly providing a dishonest signal about their size to potential rivals or mates.

The research involved walking dogs at the Tompkins County SPCA and the Cortland Community SPCA and videotaping them when they peed. McGuire started this line of research six years ago, asking basic questions about how scent marking differs between males and females, or between juveniles, adults and seniors. So far, they have walked nearly 1,000 dogs. As part of the research, they also collected data on dogs’ height and weight.

They quickly noticed that small dogs urine mark more frequently than large dogs. “We noticed that small males raised their legs up so high that they almost fell over,” McGuire said. “We decided at that point that it could be interesting to measure the angle of the raised leg to see if they’re trying to exaggerate their size.”

For this study, the researchers didn’t categorize dogs as “small,” “medium” or “large,” but rather looked at size as a continuous variable. They found that smaller dogs had higher raised leg angles than did larger dogs.

“Scent marking is a very indirect method of communicating, because a dog can urine mark and then leave the area,” McGuire said. “When we saw small dogs marking more frequently, and working hard to mark higher, we thought maybe they might prefer this way of communicating. Then they don’t have to have a direct interaction or confrontation with another dog.”

McGuire likes involving undergraduates in this research because it’s a fairly straightforward way to teach techniques for observing and scoring behaviors. It also helps students engage in useful outreach by volunteering to help at local animal shelters. The shelter dogs get more exercise and human interactions, according to McGuire.

A next step is looking into “over-marking,” McGuire said. Smaller dogs may just be angling higher because they want to cover a bigger dog’s mark rather than because they’re trying to make themselves appear bigger.