For the past seven years, Maren Vitousek, assistant professor of ecology and evolutionary biology, and her research group have been studying a population of tree swallows in the Ithaca area.

When they analyzed breeding and hormone data, the team found a negative relationship between the temperature during the birds’ development and their hormonal response to stressors as adults. Specifically, they found that colder temperatures during the development stage had an effect on swallows later in life. 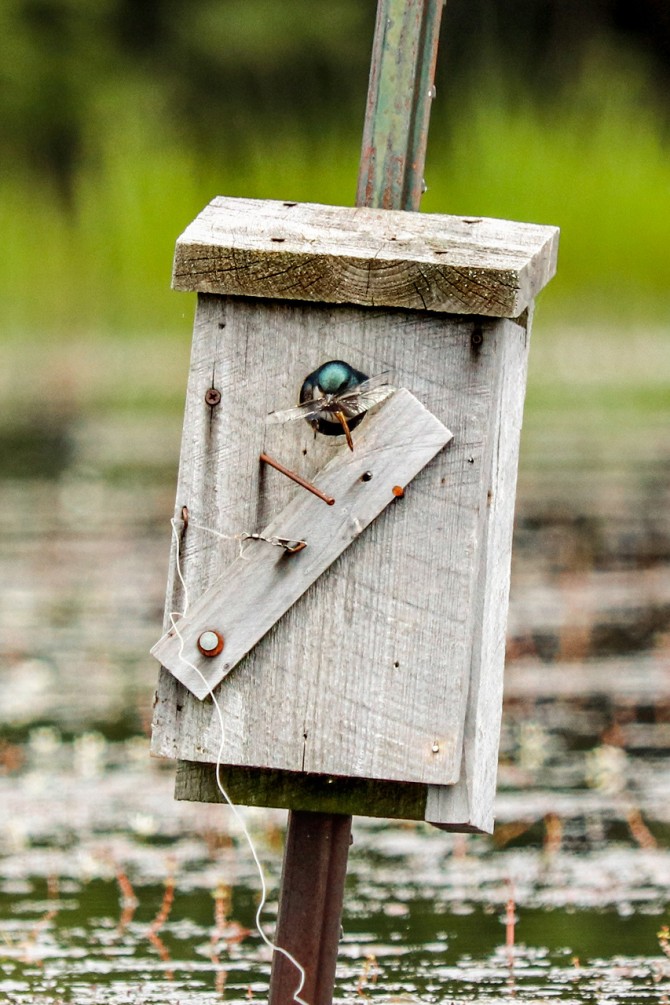 A tree swallow eats a dragonfly outside of its nest.

“This study is part of a growing body of research showing that relatively minor differences in the environment in which an individual develops can have significant consequences for how they cope with stress later in life,” Vitousek said. “This phenomenon could help explain how changing environments are impacting many different species.”

Doctoral student Jennifer Uehling, a member of the Vitousek Lab, is lead author of “Developmental Temperature Predicts the Adult Response to Stressors in a Free-living Passerine,” which published Dec. 3 in the Journal of Animal Ecology.

“For this study, we followed tree swallows from eggs to adulthood, which is an approach that is rarely possible because it is difficult to follow wild animals over the course of their lives,” Uehling said. “If the ambient temperature was cold during natal development, then the adult swallow tended to show a greater increase in glucocorticoid levels in response to a challenge when it was incubating its own young.”

Glucocorticoid hormones help regulate metabolism and play a key role in coordinating how birds respond to stressors. In some species, including tree swallows, the levels of these hormones can predict reproductive success in certain contexts.

“Tree swallows will readily build nests in boxes that we provide,” she said. “Once adult tree swallows choose a nest site, they will generally return to that location to breed for the rest of their lives. That makes it possible to measure not just a snapshot in time, but to determine how they perform throughout their lifetimes and what their lifetime fitness is.”

Since tree swallows eat aquatic insects, the bird boxes are placed in or around wetlands, marshes and bigger bodies of water. This can make it all the more challenging for the team to collect data.

“Most of the nest boxes are on land, but some are set up in the middle of a pond, so we take a canoe or kayak out to access those,” Uehling said. “Then to capture the birds, we hide out by their nest boxes and wait for them to go in. We use special techniques to hold them safely and prevent them from escaping.”

By the end of the season, the birds definitely know the drill.

“We capture individuals up to three times a year,” Uehling said, “and by the final capture, they are usually pretty wary of us.”

The data for this study also draw upon on a robust, 30-year dataset of the Ithaca-area tree swallow population. This allowed the team to correlate temperatures during development with the adults’ responses to stressors over a greater period of time and understand how the birds were responding to changes in the environment.

“One line of research that we are currently pursuing is trying to understand how temperature alters the physiological systems involved in responding to stressors, and whether the internal microbiome plays a role,” Vitousek said. “Another big focus of our research is identifying consequences of showing a particular stress coping strategy. How do differences in stress coping strategy influence health and fitness?”

Support for this research came from the National Science Foundation.

Jim Catalano is a freelance writer for the College of Agriculture and Life Sciences.