How do organisms respond to environmental change? 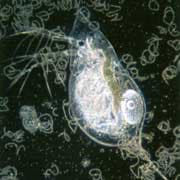 Humans are modifying the world in many ways, and not all of them for the better. The changes we cause are often severe challenges to animals, plants and microbes in nature, from the introduction of pathogens or exotic invasive species to adding toxic substance or excessive nutrients, or causing climatic change. Often several changes occur at once. Nelson Hairston's lab focuses on freshwater environments, especially lakes and ponds, where some of the species present respond to environmental change with decreases in their numbers, even to the point of extinction, while others may benefit to excess, becoming so dominant that they present problems, as in the case of harmful algal blooms stimulated by nutrient enrichment or climate warming. Hairston's lab studies how individual species, food webs, and whole ecosystems are altered when the environment changes.

One way that some freshwater organisms respond to environmental change is to evolve rapidly. A marked change in the environment favors some characteristics of plants, animals and microbes over others. These character differences are often genetically based so that favored characteristics may increase in the next generation. The shorter the generation time, the faster this evolutionary change can occur. For example, tiny but abundant plankton, eaten by fish and other larger animals, can become adapted to the changed environment within a few years because their generation time is only a few days. Hairston's lab has shown that planktonic "water fleas" (Daphnia), major consumers of suspended algae in lakes, evolved to be tolerant of harmful algae within a decade of the appearance of blooms. This rapid evolution (termed "evolutionary rescue" in conservation biology) raises many intriguing questions, for all environments, not just freshwater: To what extent can we rely on species adapting rather than going extinct when their environment changes? How does the evolution of a species that plays a critical ecological role alter the interactions it has with other species, and the functioning of the entire ecosystem? 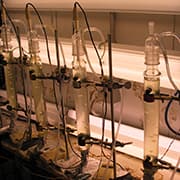 The Ellner lab also studies how organisms evolve in response to environmental change. We now know that major evolutionary changes can happen within a few generations, and can play important roles in the success of invading species and the ability of native species to persist as environments change. Evolution of antibiotic resistance is also a major challenge for controlling and treating infectious diseases. So for species we hope to conserve, control, or eliminate, it's not enough to know what they are like now, we also need to predict how they will change. The lab works on ways to measure the importance of rapid evolution, and to predict when it will occur and what the consequences will be. To test our theories we mostly use artificial laboratory ecosystems, but we also analyze long-term data from natural ecosystems and infectious diseases of humans, corals, and other organisms. The figure at left is a comparison between theoretical and experimental results on how rapid prey evolution affects predator-prey dynamics.

Will sugar maple disappear from the Northeast landscape? 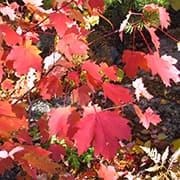 Climate warming projections coupled with temperature preferences taken from current tree distribution have some scientists predicting that sugar and red maples will be replaced by warmer adapted forest species in the Northeastern U.S. Sugar maple is the most abundant tree species in Northeast forests with immense ecological, economic, and cultural importance. Professor Brian Chabot and his students have been examining this hypothesis with long-term data sets and modeling of tree performance. Contrary to the prediction, they have determined that maples are increasing in abundance in most states and the supposed replacement species are decreasing. Other factors, such as deer consuming seedlings, also significantly affect the relative abundance of tree species. They have also projected the impact of climate warming on sugar production. The impact is modest and can be countered by altered practices in managing maple sugar forests. Active management of forests by landowners interested in maintaining maple in the landscape for economic reasons will be a key factor in countering the effects of climate change.