Defense against an invasive insect pest 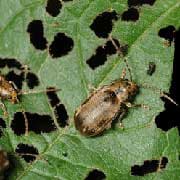 Viburnums are beloved ornamental shrubs, and several native species also provide essential habitat and food (their berries in the fall) for birds. But the Viburnum leaf beetle, introduced from Europe, is increasingly causing both economic and environmental damage in Eastern North America. The Agrawal lab has discovered that the devastating beetle shows strong preferences for particular species, especially those that have no evolutionary history with this beetle. Not unlike the hypothesis in Jared Diamond's Guns, Germs, and Steel, it appears that naïve (and native) North American Viburnums are especially vulnerable to attack. Agrawal and his students have several on-going research projects aimed at understanding Viburnum's natural defense system, documenting the spread and impacts of the beetles, and looking for ways to minimize the environmental consequences of this invasive species. 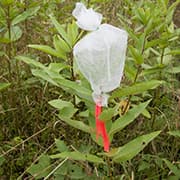 The Agrawal lab is studying the threat of invasive species and the consequences for biodiversity, both flora and fauna. Almost 30% of the flora in the United States is invasive (in other words, has been introduced, typically from Europe or Asia). Although invasive species rarely cause extinctions of natives, the ecology and diversity of species assemblages is surely being altered and we do not understand how this affects our ecosystems. This is seen most dramatically when invasive species dominate a community, as purple loosestrife, garlic mustard, and swallow-worts have done recently. Agrawal's group is currently monitoring the impact of plant biodiversity (in local experimental areas) to determine whether more diverse plant communities are more productive, more stable, and resistant to invasion. In addition they are doing experiments to determine whether having more invasive species in a plant community will suppress the growth or biodiversity of native species. By assessing the impacts not only for plants, but for animal communities, this research seeks to address the ecosystem-wide effects of biodiversity.