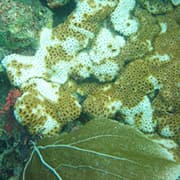 The Harvell lab is engaged in a major effort to discover the causes of coral bleaching and coral disease, which is occurring over greater and greater expanses of the world's reefs. Coral reefs are critical sites for reproduction of many marine species, and, through complex food webs, support ocean life throughout the world. All of us depend on these ocean resources for food, products ranging from building materials to pharmaceuticals, maintenance of water quality, and buffering of climate and natural disasters like flooding. Thermal stress from ocean warming causes bleaching of coral reefs when the pigmented algae, that normally inhabit coral and provide the coral animal with energy, are expelled. Bleached coral looks starkly white because the white skeleton underlying the coral skin shows through. Bleached coral loses not only its algal inhabitants but also the protection of its associated and beneficial bacteria, allowing the coral to succumb to infectious diseases. By studying coral disease in oceans of different temperatures, the Harvell lab has discovered an important link - between climate-related warming events and disease outbreaks in tropical coral seas. Warmer temperatures and more carbon dioxide in the atmosphere also increase the carbon dioxide in the water, making the ocean more acidic. Scientists are finding that ocean acidification is a rapidly increasing threat to all marine animals with calcareous skeletons (corals, snails, sea urchins), and also to pH dependent processes like reproduction. They have also found that zones of the ocean with excess nutrients, perhaps from sewage runoff or fish farms, can increase the pathogens in the water and weaken the coral's immune system. In Hawaii, Harvell's group monitors coral disease, as well as studying the natural microbial communities living in the water, in the sediment and on the coral that may affect the prevalence of disease. 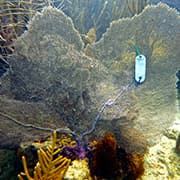 The Harvell lab is monitoring new outbreaks of disease in marine organisms and as well studying the role of bacteria living on the surface of coral. This bacterial community, or "microbiome" consists of "good bacteria" that helps protect corals and other marine animals from disease. Just as the human microbiome project is revealing striking new roles of bacteria in human health, so they are finding that bacterial associates of marine animals can contribute both to disease resistance and to food processing of their host, and undoubtedly functions as yet undiscovered. In the Salish Sea of the northwestern U.S. and southwestern Canada, they are studying how microbiomes of marine organisms are affected by increasing acidification. On the reefs of Puerto Rico, they are probing how microbiomes and immunity of corals change with drastic temperature fluctuations. 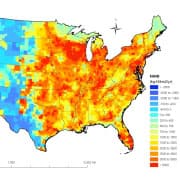 In the twenty-first century, anthropogenic reactive nitrogen (N), that is, the nitrogen in chemically reactive form that is produced from human activities, has become the primary source of N in the global N cycle. Nitrogen is a major plant nutrient, and when excessive amounts of N find their way to coastal waters, they over fertilize algae and other aquatic plants. The resulting "explosion" of algal blooms, and their subsequent die-off, ultimately leads to poor water quality and "dead zones," like the one in the Gulf of Mexico. The sources of this net anthropogenic nitrogen input (NANI) to the Nation's watersheds can be determined by a simple accounting procedure developed by Bob Howarth and colleagues, and includes four main sources of N: fertilizer applications, atmospheric deposition of nitrogen (from sources of combustion, like power plants and automobiles), nitrogen fixed by legume crops (like soybeans) and the transport of N in human food and livestock feed. Different sources dominate in different parts of the country: fertilizer and food/feed N inputs are important in the Midwestern corn belt, and atmospheric deposition matters most in the Northeast. The Howarth lab is studying the constantly changing sources of NANI to help manage nitrogen loads in coastal waters and maintain coastal water quality, so vastly important for sea life and commercial fisheries.