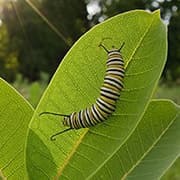 Professor Anurag Agrawal's laboratory has used studies of self-defense in plants to address what sorts of strategies may be most effective in sustainable agriculture, in particular, growing crops without chemical pesticides. All plants contain poisons, for example, the sharp spice of horseradish and wasabi, nicotine in tobacco, and the bitterness in some cucumbers. At low doses, these chemicals can be harmless, but their origin lies in the evolution of self-defense against pests. Through the study of crops (cucumber, radish) and wild plant species (milkweeds, evening primroses), Agrawal's lab has reconstructed the evolutionary history of self-defense in plants and discovered that some combinations of toxins have been sustained over long periods during plant evolution. In particular, interactions between monarch butterflies and milkweed have become a model to understand the evolution of such self-defense in plants. Armed with this knowledge, they are studying ways to maximize use of nature's plant defenses for pest control, rather than synthetic pesticides, to further the cause of sustainable agriculture. 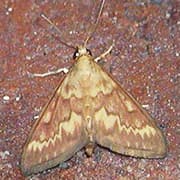 Bt corn is now widely planted in the United States and the evolution of insect resistance to Bt is of substantial concern. Bt corn, which has been modified to contain a protein toxic to moth larvae, allows for more sustainable agriculture, because insecticide use can be reduced compared to conventional corn. As a result, effects on non-target insects are also reduced. The Harrison lab uses modern genetic-genomic approaches to determine the extent to which there is gene flow between two "pheromone strains" of the European corn borer, a major agricultural pest of corn. Knowing how much gene flow there is between the two corn borer strains is essential information for management strategies, because we need to know what will happen if Bt resistance arises in one strain. Will it be transferred to the other strain? If so, at what rate? Answers depend on knowing details of genetic exchange between the two strains. 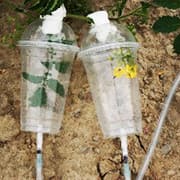 Plants protect themselves against insect pests, pathogens and herbivorous (plant-eating) vertebrates, with a large diversity of toxic and anti-digestive chemicals. Many of these defensive compounds are already used in medicine or in sustainable agriculture; others have great potential. Professor Andre Kessler's lab uses a number of wild and domesticated study systems to study such defense compounds in plants. The Kessler lab has found that many plant compounds do not necessarily have a direct defensive function but can affect interacting organisms indirectly through transmission of information in the form of herbivore-induced odor or volatile organic compounds. This information can affect the host choice of the herbivorous attackers, may attract natural enemies of the attackers to the damaged plants and so reduce pest pressure (indirect defense), or may even induce pest resistance in neighboring plants before an attacker has arrived (plant-plant communication). The Kessler lab evaluates these indirect plant defensive mechanisms as potent technologies for biological pest control in crops. They are now involved in one of the most successful applications of this kind of basic knowledge of plant chemistry and ecology for sustainable agriculture. In a multi-national project, coordinated out of the International Center for Insect Physiology and Ecology in Kenya, a so-called "Push-Pull technology" was developed that uses natural plant odor signaling to "push" insect pests out of the crop fields and "pull" them into trap crops that are then fed to the livestock. This application of natural plant defenses to agriculture has, without pesticides, already significantly improved the livelihood of more than 45,000 small farmer families in Kenya. 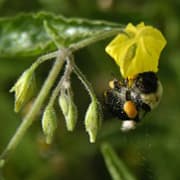 Plants respond to attacks by insects with complex changes in their metabolism, including the production of toxic and anti-digestive chemicals as well as that of odors. In other words, plants taste and smell differently after an insect attack. These changes have far-reaching consequences for the plants' interactions with the natural world, not unlike behavioral responses of an animal. Plant behavior affects interactions with herbivores (plant-eaters), with the enemies of their enemies (predators), pollinators, and with neighboring plants. The Kessler lab uses molecular and chemical techniques to study the physiological mechanisms, ecological consequences and evolution of plant responses to herbivore attack. In one example the lab found that a wild tomato species, Solanum peruvianum, growing in the Peruvian Andes changes its vegetative and floral odors when attacked by herbivores. As a consequence, pollinating bees avoid flowers on herbivore-attacked plants. Not being visited by pollinators can significantly reduce reproduction of the plant and cause an individual plant's lineage to decline or disappear. Examples like this illustrate the power of plant behavior in altering the biological community of friends and foes and emphasize the importance of understanding the roles and effects of plant compounds in order to apply plant defensive strategies in agricultural pest control.